There was this fellow in our neighborhood named Tony Zostant. He was a curly headed, slender fellow with a hippie-ish demeanor.  Amongst his many talents was the ability to ride a wheelie on a ten speed bicycle forever. I once saw him go the entire length of Grand Street riding a wheelie whilst giving the crowd of google eyed neighborhood kids the finger. With all that said, his greatest talent was not flashing obscene gestures whilst performing his pseudo circus act. His great greatest talent was the consequence of his greatest invention – “The Spudnick”. 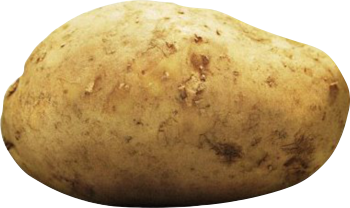 A spudnick is a hollowed out baked potato stuffed with several ounces of assorted fluids extracted from the kitchen of Monsieur Zostant and held together with a handful of toothpicks. The fluids used to populate the center of the spudnick typically include (but are not limited to) ketchup, mayonnaise, sour cream, and a couple of loogies. Now what is so great about that – you innocently ask? The spudnick by and of itself is not that spectacular. The patent (if there were such a thing for  a spudnick) would need to be broken into both a “Design” and a “Utility” as outlined on the USPTO web site. The design, I have already described, so I think we are covered there.  The utility was as a weapon of terror and befuddlement. Once he had manufactured a few spudnicks, he would head outside to execute his plan of terror and befuddlement. He did this by standing in his backyard and throwing the spudnick straight into the air over the top of his house and into an oncoming stream of kids headed home from school. I am sure you can imagine the look of surprise when one of these beauties landed near or on some poor bastard on his way home from school.

I do not ever remember Tony being lynched or tarred and feathered by an angry mob of neighborhood kids, probably due to his skill as a Schwinn wheel man. Also, I have no memory of Tony beyond this story and maybe a couple of sandlot football games. It may be that the DOD recognized his talent at an early age and called him in to work on the Star Wars program under Reagan.