I remember … yes I remember. We were told to hide under our desks, or if things really went down the crapper, head into the hallway and cover our head with our hands. We were told that this would protect us in the event of a nuclear attack. None of us had a clue as to what a nuclear attack was, but we did like the fact that we got out of listening to the blah-blah-blah of Mistress Carpenter if but for a brief time. Strangely, there was no fear involved on our part. We all had a much greater fear of getting our ass kicked by a neighborhood bully than being vaporized by a nuclear explosion. According to Russell “Ace” Hoffman, the effects associated with the detonation of a nuclear weapon are outlined below. 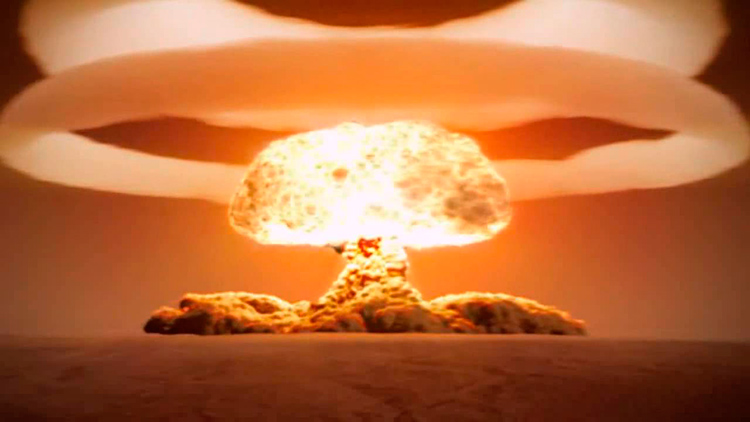 Outside the circle where people will be instantly vaporized from the initial gamma radiation blast, the light from the explosion (which is many times hotter than the sun) is so bright that it will immediately and permanently blind every living thing, including farm animals (including cows, sacred or otherwise), pets, birds while in flight and not to mention peasants, Maharajah’s, and Government officials — and soldiers, of course. Whether their eyes are opened or closed. This will happen for perhaps 10 miles around in every direction (for a 1 megaton bomb) — further for those who happen to be looking towards the blast at the moment of detonation. Even from fifty miles away, a 1 megaton blast will be many times brighter than the noonday sun. Those looking directly at the blast will have a large spot permanently burned into their retinas, where the light receptor cells will have been destroyed. The huge bright cloud being nearly instantly formed in front of them (made in part from those closer to the blast, who have already “become death”), will be the last clear image these people will see.

For some strange reason, the worries about the imminent demise of all humanity seems to have abated, even though there are about eleventy million more nuclear bombs in the world than when I was a youngster. We are now more worried about a certain group of desert hillbillies and their internet associates. Our fear is that they will band together and drop us all in a hail of gun fire and improvised explosive devices. In fact, I just read today that some goofy company is selling personal bullet proof shields for our kids, so that they can be protected in the event of a school shooting. Sound unbelievable? Check it out dude:

My conclusion? Fear is so fundamental to the human psyche. The many devils of our world use it to drive our behavior. We continue be guided about like cattle in response the exaggeration of the fearful consequences of the actions of others. Repeat after me

I must not fear. Fear is the mind-killer. Fear is the little-death that brings total obliteration. I will face my fear. I will permit it to pass over me and through me. And when it has gone past I will turn the inner eye to see its path. Where the fear has gone there will be nothing. Only I will remain. – Frank Herbert