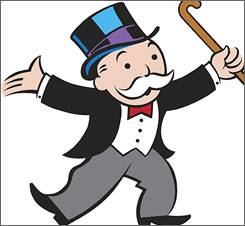 The thought has recently occurred to me that the value of money is completely in our minds. Money has value because we all really really really WANT it to have value. It is an article of faith that has been imprinted on all of humanity that a US dollar is actually worth something. In this version of reality, it is a religion.

Now I know whatcher thinkin’ … if you really thinks that, hand me over yer plethora of clams and move on with yer life. Sadly, I can’t do that because pretty much my whole life revolves around “thought experiments” and, as such, have no basis in reality. But bear with me, as I have some further evidence to support my seemingly inane conclusions.

Let us say that you and I are engaged in a game of Monopoly, that bastion of capitalism played by children and adults throughout the wondering world. Now one thing that I think you will agree with is that while we are playing in this version of reality, US dollars ain’t worth shit. You would, in fact, sell your very soul for a handful of these fake looking multicolored moolahs whilst battling me for world domination. So in this alternate reality, our religion is that of Rich Uncle Pennybags, with his associated version of legal tender.

All of this philosophizing, makes me wonder how the hell we got to this sorry state. My conclusion is that we are all lazy sombitches. We’ve created this imaginary story about money so that we don’t have to carry around a bag of cabbages or watermelons or Big Macs.

Apparently others have thought long and hard about this question, as I found the book below with a quick search on Amazon. I always think that the simplest answer is almost always closer to the truth than some advanced mathematical mumbo jumbo. But for those that gotta know, here it is.

Why is there Money?
Walrasian General Equilibrium Foundations of Monetary Theory
Ross M. Starr, University of California, San Diego, US