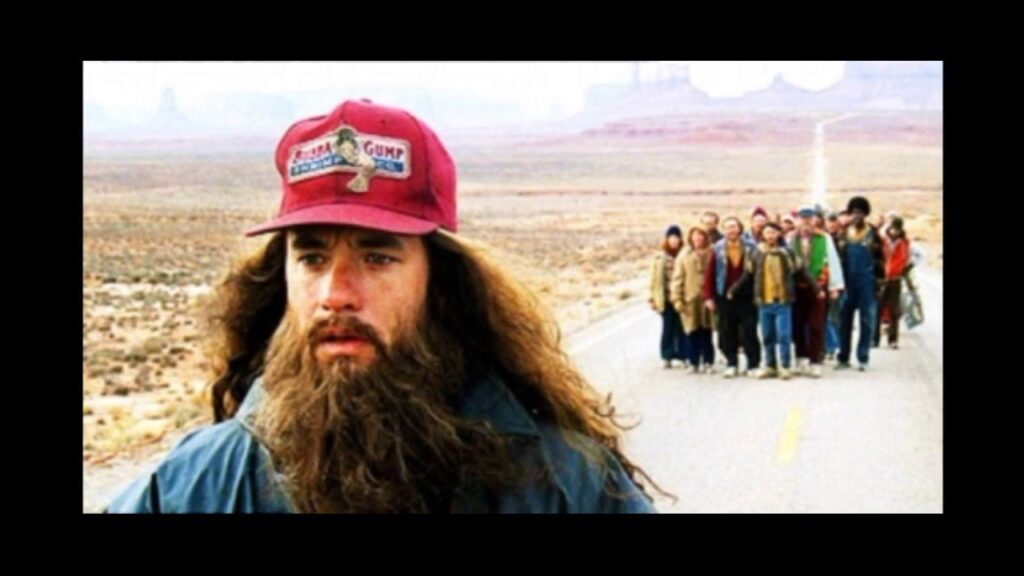 I would like to propose a new school of philosophy based upon ideas expressed in the 1994 comedy, Forrest Gump. Note that there was also a book by Winston Groom entitled Forrest Gump which I do intend to read some day, but being the simple lazy ass man that I am, I shall use the knowledge that I have rather than put forth any effort to provide a complete background to my coming rant.

The philosophy of Gumpism shall involve complex explanations and insights into the words and actions of the various characters in the movie. Now I knows what you are going to say. How can one build a philosophy based upon a fictional portrayal of a book of fiction? I propose to you that it happens all of the time. Baskin Robbins had 31 flavors originally, which evolved or devolved into the bazillion flavors we have today.

There are countless Christian denominations, all based on interpretations of a book that is translated from other languages that the adherents don’t even know or understand. King James, New International, New King James, American Standard, and the list goes on. Then there are the versions that are based on other interpretations or even new revelations that someone just made up, like the Mormon Bible or the New World Translation used by the Jehovah’s Witnesses.

Each one of these religions is the result of someone deciding that someone else’s interpretation of some version of one of these books is not right or heretical. Why else would there be Baptists, Catholics, Lutherans, Methodists, Presbyterians, Greek Orthodox, United Methodists, and Pentecostals each with multitudinous adjectives added to their names to differentiate them from the herd. Adjectives like Orthodox, Reformed, First and Second, Open, Free, and International are freely prepended onto the denomination so that their truthiness can be made manifest. I am also sure that the same can be said of every other major religion, based on principal number one of Gumpism (see below for the principals of Gumpism).

I said all that to say this: Gumpism is just as valid as any of these other religions or philosophies, since who can say that all of this other shit is just not made up as well.

OK, now that we have that out of the way, on to the Gumpian Way.

Principal number one of Gumpism is as follows, Stupid is as stupid does. A working definition of this Gumpian proverb:

A person’s imbecilic statements and actions, rather than their actual IQ, define his or her stupidity in the eyes of others. It is truly the stupid shit that you do in the presence of others that defines you.

This is found to be true throughout the wondering world. Just go to any business meeting and observe. The person that yaps the least is generally seen to be the wisest person in the room. As some wise ass once said – “Better to remain silent and thought a fool than to open your mouth and remove all doubt”.

Principal number two revolves around your place in the world. You are less significant than a wart on a toad’s ass when viewed from the context of the gigantic universe. This thought is summed up by the response given to the traditional Gumpian greeting of  “My name’s Forrest, Forrest Gump” by an Army recruiter.

“Nobody gives a hunky shit who you are, puss ball. You’re not even a low life-scum-sucking, maggot, get your ass on the bus, you’re in the army now!.”

And this bit of sage wisdom from Lieutenant Dan

A quick reality check. The mass of all humanity is equal to about 1 trillionth the mass of the earth. On top of that, humanity has existed on Earth for about 200,000 years versus the 5 billion year age of the Earth.

That’s about .004% of the time the Earth has been spinning through the cosmos. If you had a 10 foot pole that measured the total history of the world, we would be here on the last 5 thousandths of an inch. The Earth was here long before we popped out of the cosmic colon, and it will be here long after we become the victims of the second law of thermodynamics.

So really … do the machinations of the crazed cuckoo characters inhabiting this planet even matter in the grand scheme of things?

Principal three revolves around the randomness of life. This seems to be a recurring theme in Gumpism, as the Prophet Hissef Forrest is a parodox of imbecilic success at all he does. He just seems to fall in a flower bed every time he is headed for a pile of doggy doo doo. Forrest claims this principal came from “His mama”. Perhaps in the same way that Mary influenced Jesus, Mama had a similar influence on the Prophet Forrest

“Life is like a box of chocolates. You never know what you’re going to get.”

And the related principal espoused by Forrest

“I don’t know if we each have a destiny, or if we’re all just floatin’ around accidental-like on a breeze. Maybe both is happenin’ at the same time.”

As far as the chocolates go, I have found that occasionally you will get a chocolate
wrapped in gold foil that has a mouse turd hidden in the center.