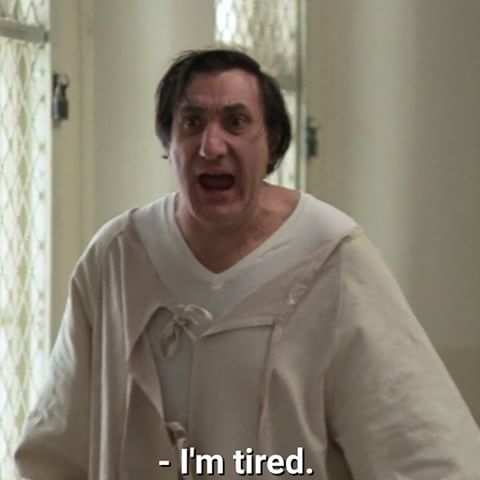 One of the truly great philosophers of the 20th century is a fellow with the mysterious moniker of “Bancini”. He didn’t say much, but when he did, people listened and stood in awe of his insightful commentary on the human condition.

Bancini spent the majority of his adult life as a voluntary resident in the booby hatch. We get introduced to Pete Bancini very early in the only work that references this character … One Flew Over the Cuckoo’s Nest by Ken Kesey. The first time we hear from Bancini, he lays a very heavy line down with the words

Now a quick analysis of this deep truth reveals that the existential crisis and subsequent boredom of humanity, leads Bancini on a search for truth through a higher power. Nurse Ratchet’s response reflects the lack of compassion and empathy in all of humanity when she says

“Someone go sit beside Mister Bancini. Quiet him down so we can start the meeting”.

We are all treated like this from birth, the first time one of our parents would prefer watching Seinfeld or playing canasta over reading us a bedtime story. Stick a binky in the kids mouth … that’ll shut him up.

Later in the book, we gain more insight into the Bancini character when he says

So, stomped and abused, we travel through life until we get to that final stage, which I feel that I am now at. That is the point at which we realize that this whole world is wrapped up in a selfish and narcissistic condition to which there is no final solution. We are all so wrapped up in ourselves that we cannot take a moment to consider the point of view of “the other”.

Technology has accelerated this sorry condition by allowing us to submerse ourselves in a virtual world of made up shit. What is that made up shit you ask? Games, made up internet stories (like this one for example), pornography, and the opinions of the loudest mouth in the room.

I leave this depressing diatribe with probably the most important and insightful words from the mouth of Pete Bancini.

“I’m tired and it’s a lot of baloney”