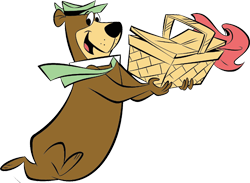 Yogi Bear claimed to be smarter than the average bear. I am not sure that the average bear is all that smart to begin with. This was just Yogi’s way of saying that he had that special street smart edge on all those that would be out to interfere with his way of life. It didn’t really matter that his way of life involved stealing picnic baskets from unsuspecting campers, Yogi was just out to survive. And why not? All of humanity had conspired to tame nature and destroy the poor bear’s ecosystem. In the mind of Yogi (and all of the other average bears), the end did justify the means. In this case, the ends were the survival of beardom and the means were stealing pic-a-nic baskets.

Which brings me to the topic du jour, when do the ends really really really justify the means? As I watch television and observe the actions of humanity, it seems to me that virtually every action performed by man, beast, or politician is a “good and proper” action in the mind of the action doer. However, there are always unintended, or possibly intended, consequences that are in no way “good and proper” to the casual observer. I suspect that Adolph Hitler, Joseph Stalin, Sadaam Hussein, Idi Amin, Osama Bin Ladin and the endless list of now deceased and deposed douche bags thought that their actions justified the means right up to their untimely ends.

Taking this all down a notch, let’s have a look at the regular old man on the street. Everyone thinks that the ends justify the means. The last time you cut someone off in traffic to get to your destination 34 seconds sooner, did the ends justify the means? How about letting someone anonymously have it on social media just because you were momentarily pissed off by something that they said? I’m not even sure what the “ends”are in this case, other than to make you feel .00005% better about your superior ass self. And don’t get me started on the actions of governments. Since when does changing some other peoples religion or political system justify bombing their sorry asses into oblivion? And how is that more high minded than some person stealing so that they can eat or get high or do whatever they do that makes them happy?

Ok, ok, enough. I’m pretty sure that even Ghandi was a prick some of the time. Unfortunately, we all take a couple of hit points against our soul every time we justify an end with some asinine means. I just hope I have enough soul armor to survive to the ultimate end.