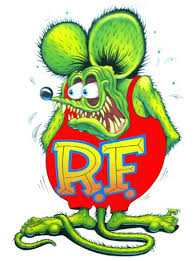 Now it will be revealed. The real truth, often hidden from most kids, but now exposed. Rats is quite dangerous critters. In fact if one bites you, there are exactly 60 seconds before you succumb to the tortuous, agonizing death of RABIES!! This was one of the facts we had to deal with as kids in my neighborhood. I lived near the Cayadutta creek. It was, in fact, about 100 yards from my doorstep.


Now, I am sure that at one time it was a magnificent creek. Mohawk Indians probably navigated its rushing waters, spearing trout, swimming, and pissing in the stream. Unfortunately, when I lived near the creek, it was a greenish, orange, purplish, color. It exuded an odor similar to rotting meat with a slight tinge of vinaigrette dressing. By the sides of the mighty Cayadutta there existed pea soup looking pools of muck. It was believed by most kids, that if you stepped in this gook, you would be sucked into the burning pit of eternal torment, reserved for those that didn’t eat their vegetables. Also, along the sides of said creek (and to our great delight) were the biggest damn rats you ever saw.


All I can say at this point is, show a kid a rat, and he will immediately dream of some way to catch it. Our chosen attack method was composed of huge rat traps that you could buy from the Family Bargain Center. The traps were a most effective tool of death, both for the rat, and for the kids. Only the bravest soul would cock one back and set it. The fear was always that you would snap off the tip of a finger, break a knuckle, or get caught by your parents.


Creeping along the sides of the sinister Cayadutta, we would set our traps near the bank. It was always a difficult task to identify the most frequently traveled path by rats. You had to sort of think like a rat. Rats possess some sort of intrinsic evilness that belies their size. Thus, it was quite simple for a small child to think exactly like a rat. Thinking back now, I don’t remember how many rats we caught. Heck, I don’t even remember what we did with them after we caught them. What I do remember was the sense of belonging to an elite group of kids that could all do one thing very well. I also remember the preparation, planning, and execution of our plan.

There is something about doing things in secret with a group that makes it all the more delicious when it comes off. From this example, one comes to realize why some might gravitate towards the KKK, the John Birch Society, Al-Quaeda, the Masons, the Elks club and other equally noble organizations.