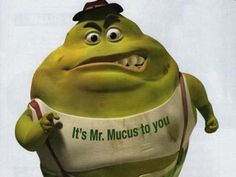 Every neighborhood has a cast of characters. Strangely, certain events get tied to a person and they are forever remembered for some small character flaw or inane statement that they might have made. That’s probably how serial killers get their nicknames.


In my neighborhood there was this feller named Tim Vose, whose nickname was King Phlegm. Now all animals have a self defense mechanism. Porkypines have quills, skunks have stinkum, rattlesnakes have poison fangs, and King Phlegm could put your eye out with a wad of spit at ten paces.


Tim  was a good natured fellah, that had the misfortune of being a younger brother. When you are a younger brother, you are generally susceptible to regular ass whuppins, head smackins, noggin noogies, and the like.


Tim also had an ex-marine father named “Junior” and a mother named “Mona”. Let me just assure you, when you got an ex-marine named Junior for a father, you better watch yourself. King Phlegm’s uncanny spit marksmanship might well have been the result of basic training from Pappy Phlegm.

Getting a beat down from an older brother is bad enough, but when the other kids see a beat down occurring on a regular basis, they can either show pity or go all “Lord of the Flies” on you. So King Phlegm, through selective mutation, developed his defense mechanism. On top of that, he was a fast little squirt, so he came to master a sort of drive-by shooting approach to defending himself.


As Stormin’ Normin’ Schwartkopf says “A good offense is your best defense”. The very act of spitting was not what you might think, when it came to King Phlegm. It was like watching an olympic athlete perform.

Step one was the accumulation of the phlegm ball. This involved a series of deep inhales and snorts as he gathered his artillery piece into the chamber.

Step two was the launching of the aforementioned projectile. His entire body was engaged in the initial forward motion followed by a barking exhale of air as the phlegm ball shot from his throat in a straight bee line.

His spits were not arced, they were more like precision missile strikes. Notice that I say the phlegm shot from his throat, not his mouth. This apparently was critical to the trajectory, along with the head snap and upper torso thrust. Forty five years later, that is the sum total of my memory of Tim.

So what can we learn from all of this? Whatever you do, do it with all of your heart. People really respect and remember excellence.