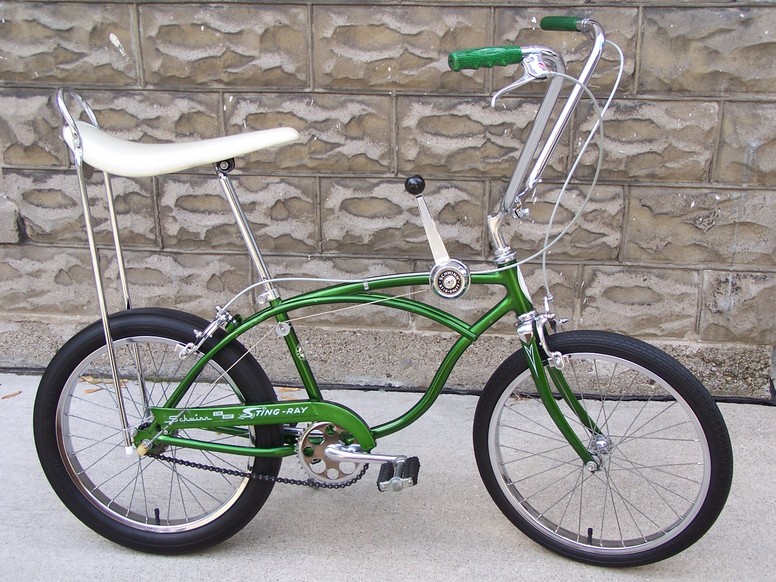 So there I am at the top of Crescendoe Road Hill parked on the seat of my green Schwinn Banana Bike. Yes I do date myself don’t I. Next to me is John Luft, seated atop his equally mighty banana bike. For those of you who have not a friggin’ clue as to what a banana bike is, a brief diversion is required.

Just before ten speed bikes and just after the demise of the legendary JC Higgins Fall-a-part, Schwinn developed a bicycle that looked much like a miniature version of the scooter ridden by Peter Fonda in Easy Rider. This magnificent animal had itsy bitsy wheels, a seat the size of a torpedo, and handlebars that extended to about three feet over your head. It also featured a three speed stickshift mounted on the cross bar. Strange as it may seem, every damn kid on the block had to have one of these things. If you didn’t you were branded a lowlife dirt sucker.

So there we were at the top of the hill, ready to race. Now the funny thing abut any high speed hijinx on a banana bike is that, you needed to get your feet going about 17,000 RPM’s and maintain a steady eye whilst your feet were spinning like a Turkish dervish.

John Luft had a little problem in this department. It seems that when John was a wee lad, one of the evil Hennessy boys had done a bit of bow and arrow target practice on John’s head. John had one glass eye and one real eye, so when he looked at you he was kinda sorta looking at you if you get my drift.

So, off we head, down the hill in a neck and neck race to the death, winner take all, kick ass, and take names drag-a-thon. John grabs a twenty foot lead and seems about to win, when suddenly, he looses control of his banana, and heads ass over teakettles, face first into the concrete. Slamming on the brakes, I rush to John’s side. John slowly rises, blood streaming from every possible non-bleeding spot, and ever so slowly walks towards home. He never said a word, he just walked slowly home, busted teeth and all.

Later, it was discovered that John apparently suffered a concussion and had no memory of the accident, the walk, the blood, the teeth, … nothing. Years later I would run into John in a bar. He was drunk as hell and doing mule kicks in the middle of the bar room floor. Later that night he got the shit kicked out of him by some other drunken moron. I have not seen or heard of John since.

So why this story you ask? I am sure there is a lesson here, so lemme think.

Some people are just disaster magnets. Things seem to just “happen” when they are around. Now in the corporate world, these people would be called “movers and shakers”. In the poor homeboy world, these people would be called “dumb asses”. So what is the difference between a “dumb ass” and a “mover and shaker”? I think it depends on how many bodily functions, organs, or limbs you lose during the process of making things “happen”.

If you can make a whole bunch of things “happen” and still retain all of your body parts, I suspect you would have a shot at being the CEO of some major corporation.